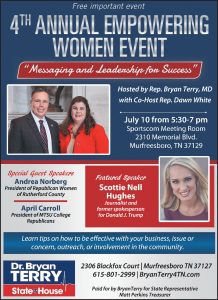 MURFREESBORO, May 3, 2016– The 3rd Annual Empowering Women Event, hosted by Rep. Bryan Terry and Rep. Dawn White, was held Saturday, April 30 at Sportscom in Murfreesboro. A multitude of women attended to learn about how they can get involved at the local and state levels, as well as how they can make a positive impact on policy and procedures. The event featured keynote speaker Republican Majority Floor Leader Sheila Butt. Other speakers included Rutherford County Chamber of Commerce Vice President of Operations Stephanie Brackman, and MTSU College Republican President Jami Averwater.

“By all accounts, the event was a success. Our speakers did a fantastic job inspiring our attendees, and showing them where and how to get involved. It’s my hope to continue to grow the event to help women of all ages in our community know the impact that they can make,” stated Rep. Bryan Terry

Rep. Butt gave a moving speech that drew praise from the hosts and attendees. From job creation to pro-life issues to Constitutional rights, she covered a wide array of issues with a message on how one can and should be bold and unafraid to take a stand. With several Rutherford County General Sessions judicial candidates in the audience, she spoke of the negative effects of judicial activism and the need to elect judges that are Constitutionally sound.

“I was honored to take part in such a great event. It is very encouraging to see leaders like Representatives Terry and White host this kind of community outreach, and it was even more encouraging to receive such positive feedback from women after the event,” commented Rep. Butt.

The event attracted women of all ages including college students and retirees. Jami Averwater, a MTSU senior, spoke to the crowd about various avenues to get involved. She spoke of our current situations in society and how women of all ages can make a difference for the future of Tennessee. Rep. White, in her comments, reiterated and expanded on the speech of Averwater explaining the various opportunities for women in the community for women.

Stephanie Brackman, in an engaging speech which included some of her struggles during her youth, spoke of building relationships in the community and how these relationships can impact everything from one’s business to public policy. With her diverse background and road to becoming Vice President of Operations of the Rutherford County Chamber of Commerce, she provided attendees with an example of how one can use their skills to lead and get involved.

With Tennessee having many Republican women leaders, from Speaker Beth Harwell to Rutherford County GOP Chairman Donna Barrett, the event highlights the continued commitment from GOP leaders to encourage and recruit women at the grassroots level.

“The event has been designed to empower and inspire women to get involved at the local and state levels.  The Republican State Leadership Committee has two outreach programs, the “Future Majority Project” to recruit minorities, and the “Right Women, Right Now” initiative to recruit women,” said Terry. “As a Native American, minority outreach is one of my objectives.  Reaching out to women and the youth are my other objectives.  The “Right Women, Right Now” initiative was my inspiration for the Empowering Women Event.”

Terry remarked that he was honored to have Rep. White as a special co-host. “She did a fantastic job and is a fine example of an empowered woman,” said Terry. Speaker Harwell has been in the Tennessee General Assembly for over 26 years and is the first woman to be elected Speaker of the House.  She spoke about her time at the Capitol, the women’s suffrage movement, and the part Tennessee played in it.  In addition, she spoke about how inspiring it was to look into the well of the General Assembly and see a wall of Republican women standing to support the pro-life, pro-woman’s health bills that were passed this year.

I’ve heard Speaker Harwell give several speeches.  The overwhelming response from those in attendance was how great of a speech she gave.  I would have to agree.  She definitely provided inspiration to those in attendance,” remarked Terry.

Republican State Executive Committeewoman Lynne Davis and Rutherford County School Board member Lisa Moore, also, addressed the crowd and delivered their message of empowerment.  Lynne Davis has been a mother that home schooled, then became a successful realtor.  She began getting active in the election process, became the Rutherford County GOP Director of District 48, and most recently became elected to the SEC.

Lisa Moore has became an advocate and activist for various causes in Rutherford County.  With the adverse effects of Common Core and alarming information in textbooks being her inspiration, Lisa Moore spoke about her involvement in textbook reviewing, and ultimately, her decision to run for the opening on the Rutherford County School Board.  Hard work and passion proved that one can run a successful grass roots campaign and make a difference.

Because the event highlighted empowered women, Terry presented Tennessee proclamations to four women from Rutherford County that had an impact on Tennessee and his service to District 48.  Joanne Skidmore of the Tennessee Federation of Republican Women brought Rep. Terry five resolutions honoring Republican women in Tennessee.  They were able to obtain unanimous sponsorship in the House.

Jackie Archer worked with Terry on a bill concerning the textbook adoption process.  Both Mrs. Archer and Terry were able to work with the Tennessee Department of Education and the Textbook Commission to have them adopt positive citizen input into the process.  This was absolute proof that an individual citizen in conjunction with their state representative can enact change and have an impact on the state.

Michelle Blaylock-Howser is a local attorney and vital member of what Terry refers to as his Citizen Action Board.  Mrs. Blaylock-Howser worked with Terry by reviewing and discussing several bills and issues.  She is working with Terry to prepare a legislative agenda for 2016, as well.

“I appreciate all those who spoke and those who were in attendance.  The event grew from last year and was a resounding success.  It is my hope that women or any citizen can see that they can make a difference.  As your representative and advocate at the Capitol, please, contact me  if you would like to get involved,” encouraged Terry.

MURFREESBORO, Tenn., April 28, 2015– Representatives Bryan Terry and Dawn White are set to host the 2nd Annual Empowering Women Event to encourage women to become involved at the local and state level of government.  The event will take place Thursday, May 7 from 5:30-7:00 PM at The Warehouse, which is located at 730 Middle Tennessee BLVD #15.  The event is free and open to the public.
The Empowering Women event showcases some speakers from the local and state government levels who will discuss their experiences, as well as give tips on how others can make a difference.
Headlining this year’s event is Tennessee Speaker of the House Beth Harwell. Speaker Harwell has been in the General Assembly for over twenty years and is the first woman to be elected as Speaker of the House in Tennessee.
GOP State Executive Committeewoman Lynne Davis and Rutherford County School Board member Lisa Moore are, also, slated to speak.  Mrs. Davis was the successful director of District 48 for the Rutherford County GOP before being elected to the SEC.  Mrs. Moore has been an active parent and citizen in Rutherford County who ran an incredible winning campaign to become a school board member.  Both will share their experiences and provide information on how others can become involved.
As hosts, Dr. Terry and Mrs. White are encouraging all locals to attend, including men, as the event is free and will provide citizens the opportunity to learn how to exert their civic authority.
“I’m very excited to have Rep. Dawn White joining me this year as co-host.  She has been an asset to me and Rutherford County at the Capitol.  I’m looking forward to helping empower citizens with the tools to get involved.  I hope to see everyone there,” said Terry.
Follow Dr. Terry on Facebook and Twitter.