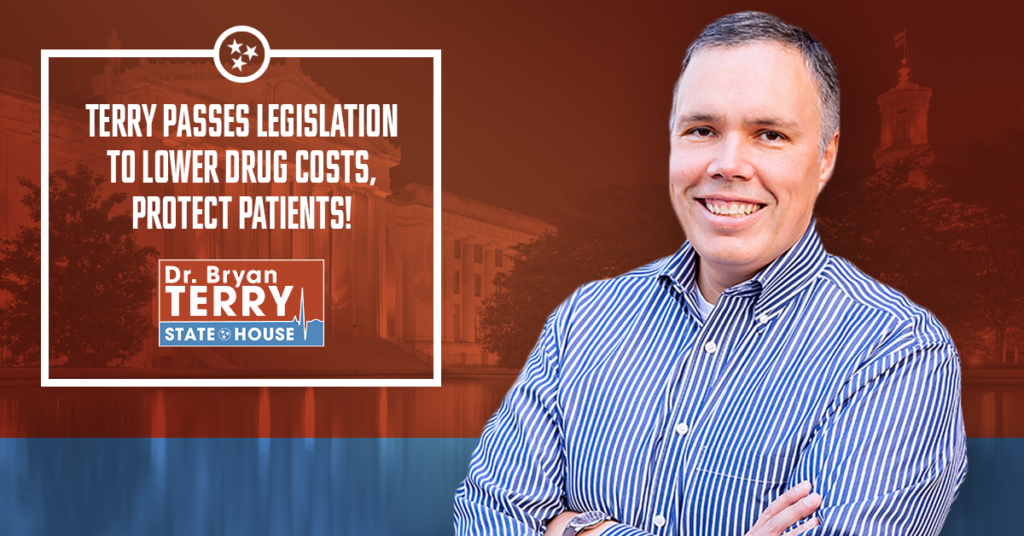 With prescription drug prices and health care costs on the rise, Rep. Bryan Terry, MD(R-Murfreesboro) tackled the problem head on during the 110th General Assembly with various measures aimed at transparency and pro-rating copayments.  As part of his agenda, President Donald Trump has focused on prescription drug prices, and Rep. Terry led Tennessee in taking several steps to help cut costs for patients.

The lack of transparency and competition in prescription drug pricing have contributed to an environment where costs of medications have skyrocketed.  President Trump mentioned the problems in his State of the Union address and his Council of Economic Advisors(CEA) found that the lack of transparency is hurting the consumer.  At the center of this issue is a controversial contractual measure applied by Pharmacy Benefit Managers(PBM) to prohibit pharmacists from telling patients that their medication may be cheaper if they pay cash.  The “Pharmacy Gag Clause”, as it is known in the industry, has often led to patients and their employers paying a significant greater amount for their prescriptions while the PBM’s receive a cut from the overpayment known as a clawback.

“Patients and employers should be irate that this practice even existed,” explained Rep. Terry.  “I co-sponsored and amended a bill(HB 2219) that removed the gag clause to ensure that patients will have the right to know that they can pay a cheaper price.”

Rep. Terry didn’t stop there, though.  At the center of Governor Haslam’s TN Together opioid legislation is a concept called partial filling of prescriptions or as Dr. Terry calls it “Patient Tailored Dispensing”.  Rep. Terry was the architect behind amending the TN Together Plan to ensure patients weren’t going to over pay for prescriptions.

“The original bill placed multiple hardships on patients and providers including multiple copayments and trips to the doctor just to have pain treated which, to me, was unacceptable,” described Terry.  “With the support of Speaker Harwell, I worked with the Governor and his staff, as well as Senator Haile, on language that decreases the burden and costs for patients while ensuring that we, also, decrease unnecessary opioids in medical cabinets and on the street.”

On the last day of session, Terry amended his own legislation, HB 2440, to ensure patients would only pay a prorated amount of their copayments and cost sharing for their prescriptions on controlled substances.  Though TN Together authorized patient tailored dispensing, it was Terry’s legislation that protected patients from the extra burden of multiple full payments.

“I’m proud to have led in this fight in standing up for patients to improve transparency and cut prescription costs, but there is still more that needs to be done,” concluded Terry.  “I look forward to continuing to address these issues to improve patient care.”

Rep. Bryan Terry, MD is the Chairman of the House Health Subcommittee and, also, serves on the full Health and Civil Justice Committees.  He can be reached at rep.Bryan.Terry@Capitol.TN.Gov or at 615-741-2180.