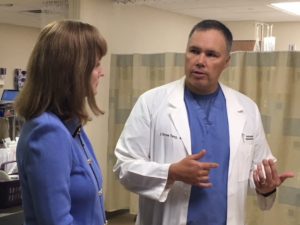 The opioid crisis is a complex issue impacting Tennesseans of all demographics. Most recently, I opined on the issue in a three part series discussing the supply and demand of opioids including what steps have been taken at the state and where we need to go from here.

Please, follow the links to the articles and feel free to provide me any feedback at BryanTerry4TN@gmail.com

The Supply and Demand of Opioids: An Intricate Dynamic

The Supply and Demand of Opioids: Tackling the Supply Problem

The Supply and Demand of Opioids: Tackling the Demand Problem

NASHVILLE, January 22, 2018– Representative Bryan Terry, MD (R-Murfreesboro), chairman of the Tennessee House Health Subcommittee, has filed legislation and has other legislation ready to be filed to address the opioid crisis facing Tennessee.  With the issue being multifaceted in nature, Rep. Terry is looking to touch various aspects of the problem with his legislation, as well as advocate for other aspects not necessarily requiring legislation.

While many look at prescribing habits leading to excess opioids in circulation as a leading cause of the problem, Rep. Terry explained that the problem runs much deeper.  “There are various cogs in the wheel driving the opioid crisis.  Failure to properly address legal and illicit access to opioids, addiction, treatment, lack of education, and government meddling has created a perfect storm leading to this problem.  While looking to address each aspect of the problem, we must ensure that we protect legitimate patients and legitimate providers.”

The first bill filed by Rep. Terry aims to provide a deterrent to the illegal manufacturing, sales, and distribution of potent opioids like fentanyl and sufentanil which are used in chronic pain and the perioperative period, and carfentanil which was developed as a large animal tranquilizer.  These drugs are often cited as being 100 to 10,000 times as potent as morphine.  “Potency and route of administration increase the speed of addiction.  Some of this is coming in from China via Mexico and finding its way to our streets.  While we have had some arrests in Tennessee, New York and Florida have had some high profile cases involving up to 32 million lethal doses,” explained Terry.  The bill increase the penalty for possession, sales, distribution, or manufacturing of these drugs to an A or B Class felony depending on the amount of lethal doses involved in the arrest.

On the prevention side, Rep Terry explained that as with many issues, the root of the problem is often found on the supply and demand curve.  “While looking to cut down on the illicit supply, we must look to address various aspects of demand.  Proper education on the risks, as well as decreasing barriers to alternative health care modalities that treat pain without opioids are vital to decreasing this problem.”

“Neuropathic pain, chronic pain syndromes, and even perioperative pain can be treated with nerve blocks or pain injections.  Our current system, especially within TennCare, is set up to incentivize the use of opioids over other modalities.  Incentivizing the use of cheap opioids over viable alternatives increases the risk of addiction and demand.  I will be offering a bill to change that,” explained Rep. Terry.

Another possibility that could decrease the use of narcotics is the medicinal uses of cannabinoids which are in cannabis.  “Crohn’s Disease, spasticity involved in MS, and other painful conditions can see benefit from cannabinoids which can potentially cut down narcotic usage without the recreational high often produced by smoking or ingesting.  It’s hypocritical that the federal government makes all cannabinoids Schedule 1 drugs, yet Marinol, which is synthetic THC is legal in all states including Tennessee.  Ignorance and fear is no way to govern, and that form of governance is hurting patients.”  Rep. Terry says he is supportive of research and medicinal uses of cannabinoids under the care of medical providers.

Diversion is the process of taking opioids from a legal prescription and diverting the drugs to be used recreationally.  “Overprescribing and doctor shopping are two aspects that increase the risk of diversion.  I have legislation that will attack that on two fronts.  Currently, one can hold on to an opioid prescription for up to six months before it is filed in the system and filled by a pharmacist.  My bill will require a prescription to be on file with a pharmacy within seven days and filled within 60 days.  Secondly, some individuals do not want the entire prescription at one time.  The bill will allow for partial filling of an opioid prescription to cut down on the amount someone may want at their home.”  Rep. Terry says that he is working with the Tennessee Medical Association and Tennessee Pharmacist Association on the legislation.

Rep. Terry is, also, set to propose legislation for an opioid hotline within the Tennessee Department of Health which will provide whistleblower protection for those who come forth with information in good faith about potential abuses in the medical system.  Recently, 60 Minutes aired an expose on abuses of oversupplies of opioids to pharmacies or medical facilities.  In addition, local pill mills, mail order pharmacy facilities, and unscrupulous providers have led to an excess of opioids in the public.  The legislation looks to curb those unethical practices.

While prevention of demand and reduction of supply are two of the main components in solving the opioid crisis, treatment for those caught in the crosshairs is an important aspect of tackling the problem.  Rep. Terry is carrying a bill that would allow long acting injectable Suboxone be available in Tennessee for opioid addiction treatment.  “Folks, often, only have thirty days of inpatient treatment covered by insurance.  Unless someone is treated for up to ninety days or longer, the relapse rates are greater than ninety percent.  Injectable Suboxone that lasts thirty days will help decrease the rates and costs of relapse, and it will decrease diversion of the current pill form.  I know that Governor Haslam is looking at increased funding for treatment, and I have spoken to his administration about this treatment option.”

Representative Bryan Terry represents District 48 which is the eastern half of Rutherford County and can be reached at 615-741-2180 or vie email at Rep.Bryan.Terry@Capitol.TN.Gov.

NASHVILLE, Aug. 24, 2017– This week, Tennessee State Rep. Bryan Terry (R-Murfreesboro) and State Sen. Steve Dickerson (R-Nashville) sat down with News Channel 5 for an extensive interview over the opioid crisis Tennessee is facing. Watch the interview below.

Bryan Terry, MD serves as Chairman of the House Health Subcommittee, as well as a member of the House Health and Civil Justice Committees. He lives in Murfreesboro and represents House District 48, which includes the eastern half of Rutherford County. Terry can be reached by calling (615) 741-2180 or emailing: Rep.Bryan.Terry@capitol.tn.gov.