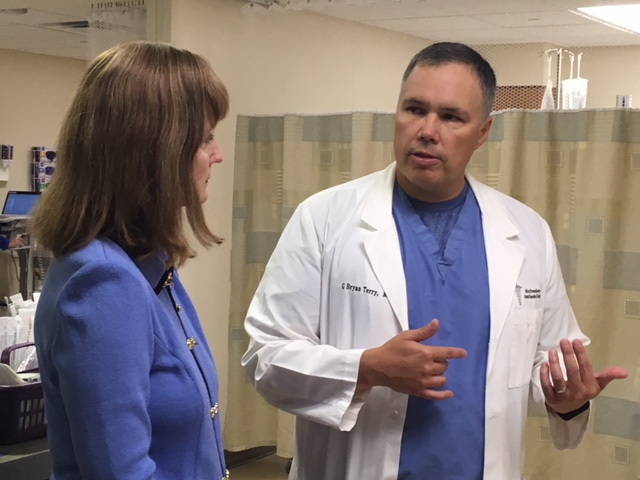 NASHVILLE, JULY 8, 2019– Representative Bryan Terry (R-Murfreesboro) recently sent letters to the Centers for Medicare & Medicaid Services (CMS) on behalf of District 48 and the Tennessee House Health Committee for support of a new proposed federal rule that would help improve the financial situation of Tennessee hospitals.  The rule would adjust the formula for calculating the Medicare Area Wage Index (AWI) which would improve payments to Tennessee hospitals and help stabilize the health care market.

“Because Medicare payments are predicated on the Area Wage Index and the AWI for Tennessee is low, our hospitals, especially our rural hospitals and those located in East Tennessee, are placed at a significant financial disadvantage compared to other states,” explained Terry.  “While medical equipment, supplies, and medications have continued to climb, Tennessee’s AWI has not. Hopefully, CMS will fix this disparity.”

Currently, every county in the State of Tennessee falls below the area wage index. This places Tennessee at a rank that is near the bottom of the reimbursement ranks in the country and has created a financial problem for hospitals in Tennessee.  The relief CMS has proposed in this rule will help keep more Tennessee hospitals from shutting down, and it will help keep healthcare access open for our citizens.

As Chairman of the Health Committee, Terry worked with the Tennessee Hospital Association, members of his committee, and other groups to address this problem.  In his letters, he pointed out that the structural make-up of AWI created a cycle that has led to the downfall of Tennessee’s reimbursement rate over the last 15 years. He emphasized that the proposed rule by CMS, CMS- 1716-P, would allow a beneficial plan to resolve the wage index disparities for hospitals with a wage index value below the 25th percentile, and would check the abuses of the “rural floor” calculation seen in other states.

“Medicare often doesn’t even pay enough to cover the costs to provide a service.  TennCare often pays significantly less than Medicare. This problem has to be addressed if we want to recruit doctors and services that will keep our hospitals afloat,” stated Terry.  “While this rule change won’t solve every problem in health care, it is a necessary step.”

In addition to addressing the AWI, Terry has been actively working on legislation within the House Republican CARE Plan which is aimed at decreasing costs and improving consumer driven care.  He has, also, been working to increase efficiency with TennCare while looking to help Tennessee take advantage of the State Relief and Empowerment Waivers offered by the Trump Administration.