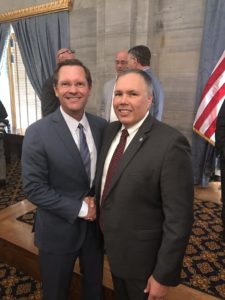 On Wednesday, Representative Cameron Sexton (R-Crossville) was elected by the Tennessee House Republican Caucus as Speaker-Select to replace Glen Casada (R-Franklin) who is set to resign his position as Speaker next month.  Representative Bryan Terry, MD (R-Murfreesboro) lauded the choice of Sexton and touted his selection as being a positive for Tennessee and Rutherford County.

“Cameron Sexton and I have been side by side fighting for Tennesseans on many issues including the House Republican CARE Plan and opioid-related bills.  Working closely with him as committee chairmen and on the House floor gives me a unique perspective that not all have seen,” explained Terry. “When looking for a Speaker that can help Tennessee, Rutherford County, and District 48, while helping our caucus move forward, one needs a person that can check all those boxes.  I believe we are getting that in Speaker-Select Sexton.”

Sexton and Terry previously served together as Health Committee Chairman and Subcommittee Chairman respectively under former Speaker Beth Harwell.  Together, they formed a formidable team known around the Capitol as patient advocates and for their relentless efforts in addressing the opioid crisis.  They were two of the key members in formulating the CARE Plan, which has laid the foundation for injecting consumerism and empowering patients into the Tennessee health care system.

Sexton, who currently serves as the Republican Caucus Chairman, was chosen amongst six Republican candidates during a caucus election held Wednesday in the Old Supreme Court Chamber at the Capitol.  He ran on a platform of effective leadership through leading by example and empowering legislators via legislative, messaging, and fundraising support.

“Having served as Majority Whip, Caucus Chairman, and Chairman of Health has provided me with the experience needed to be an effective Speaker,” stated Sexton.  “Ultimately, it is about the House members and the constituents of Tennessee.  Helping legislators with their constituents like I can do with Dr. Terry each day is what we need as the House moves forward.  I appreciate the faith our caucus has instilled in me, and I am looking forward to the challenges ahead, and to continue working with great legislators like Dr. Terry.”

As Republicans hold a supermajority in the House, Sexton is expected to be overwhelming chosen as the next Speaker of the House when the Tennessee General Assembly reconvenes for a Special Session on August 23.

“If my time and experience working with Sexton is any indication of things to come, then his election will be a positive for Tennesseans, Rutherford County, and patients.  Our caucus is ready to move forward and continue to do great work for Tennessee with him as our Speaker,” concluded Terry.