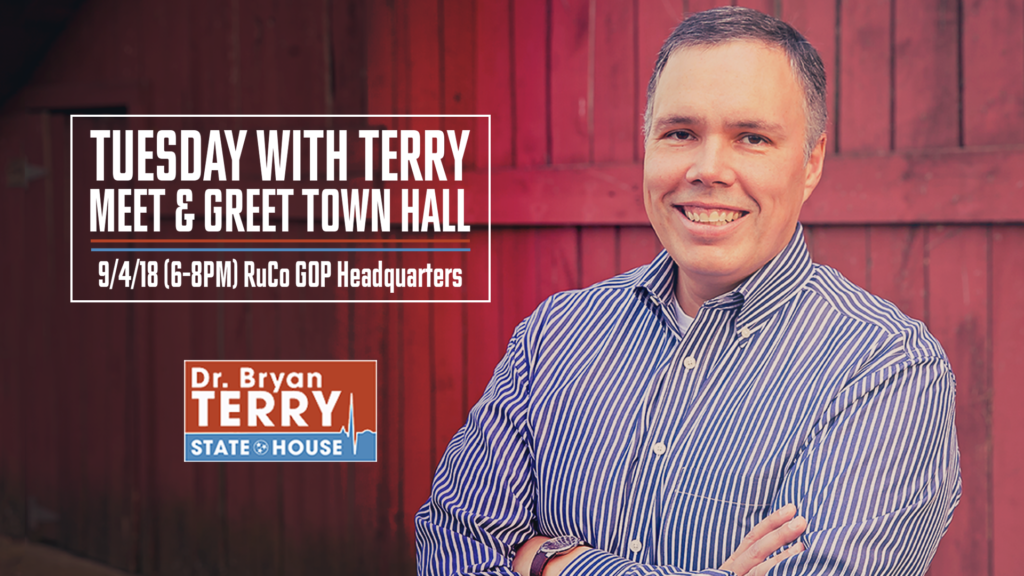 Representative Bryan Terry, MD (R-Murfreesboro) will be kicking off the Tennessee general election season with a special “Tuesday with Dr. Terry Meet and Greet Town Hall”.  The event is schedule to be held on Tuesday, September 4th from 6-8 pm at the Rutherford County GOP headquarters at 111 E. Main Street in Murfreesboro.

Rep. Terry, known for his openness and willingness to discuss issues with constituents at local events, at their doors, or on social media, has hosted several community events during his time in office including an education round table, Providers and Politics, and his Empowering Women Event.  He has, also, held several “Tuesday with Dr. Terry” events where he listens to constituents and provides information on legislative issues in an informal setting. He states that this event, though, will provide for an informal meet and greet followed by a more structured town hall setting.

“As a self governance trained elected official, helping constituents understand the issues and have their voice heard at the Capitol is a responsibility that I take to heart,” stated Rep. Terry.  “Regardless of the capacity, it’s opportunities like these that help our community, families, and individuals interact interact and help shape our republic.”

Dr. Terry was recently called a “model public servant” by the Tennessee Legislative Report Card in which he receive a perfect score of 100.  In addition, he has received awards for being a Taxpayer Hero, a Constitution Protector, and he was recognized for his efforts in Faith, Family, Freedom, and Fiscal Responsibility by Latinos for Tennessee.  He has been endorsed by the National Federation of Independent Business, the Tennessee Professional Firefighters Association, and Tennessee Right to Life.

“Elections are about choices.  Whether at the federal, state, or local level, this year, we have a choice of continued economic growth, improvement in jobs and education, and protecting our rights and liberties or people can choose failed liberal policies and reckless ideologies like socialism,” explained Terry.  “I’m offering the first option and I’m looking forward to the opportunity to discuss our community’s shared values and how we, working together, can continue to keep making a positive difference.”

Rep. Bryan Terry is the Republican nominee for District 48 in Tennessee which is the eastern half of Rutherford County.  More information on him and his positions can be found at BryanTerry4TN.com or on Facebook at @Dr.BryanTerry.