MURFREESBORO, January 4, 2016–  As we begin the new year, I’m excited to announce a new form of outreach to millennials and students, and put forth an outlet for discussion of issues that are pertinent to their generation.  I will be collaborating with MTSU student Sage Kafsky to provide write ups and discussions of several issues as we enter the legislative session and universities begin their Spring semester.  Jointly, we will be providing a “Campus Connection” for stu 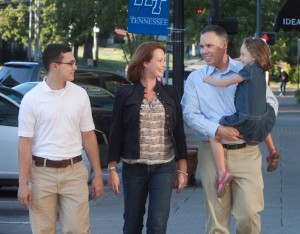 dents and millennials to voice opinions and respond to issues and current events.

Whether in District 48, at the Capitol, across Tennessee or the nation, as I have spoken with many of our youth, the overwhelming issue that they mentioned was that they wanted to be heard.  They often felt like they weren’t taken seriously, and those in power, whether at universities, communities, or beyond, didn’t listen to their concerns or opinions often enough.  Of course, when many of their generational cohorts earn the monikers of “Cupcake Nation” or “snowflakes” due to childish and immature behaviors, one can readily understand why many of the serious and responsible millennials and college students have had their concerns brushed aside and dismissed by those more senior or in positions of power.

It is often said that perception is reality, and there is a pervasive perception about the next generation that permeates through society.  I, however, have had many interactions and discussions with millennials that would alter that perception if their voices were not drowned out by much of the negativity and nonsense put forth on many campuses and in the media.

One such individual who is looking to make a difference and change that perception is MTSU junior student Sage Kafskywho is majoring in Political Science with a concentration in pre-law and minors in history and writing. Sage is an executive board member of both the MTSU College Republicans and the MTSU chapter of Turning Point USA. She also self-published her first novel, The Journey, along with several short stories in 2016.  Having spoken with Sage at several events on campus and in the community, it was apparent that she was actively trying to find her place in the world while helping others to find their own.  When offered the opportunity to participate in an endeavor to help her generation have a more active voice, she enthusiastically accepted the challenge.

Elaborating on the opportunity to provide a connection in the community, Kafsky stated,”I feel that it is becoming increasingly important to focus on bridging the gap between college students and their representatives. I’ve met so many young people in this community who want to be involved but feel that their voices will be left unheard. Likewise, I’ve met many members of older generations who worry that my generation will not approach issues with seriousness or will only focus on a narrowed view of the issues. This disparity seems to stem largely from a miscommunication between the groups, which this connection can hopefully help to remedy.”

When discussing the perceptions and misperceptions of millennials, Sage explained, “My generation tends to be saddled with a lot of negative labels, and those overshadow a lot of the younger voices actively working to make a positive impact both on college campuses and in our communities. This can be discouraging to everyone involved, but discussion and communication can help. Many of us have the same goals; we just need to work together to achieve them.”

While Campus Connection will be a work in progress, we are looking forward to discussing issues, bridging gaps, and altering perceptions as we look to hear from our community’s  millennial generation.