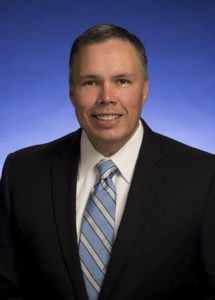 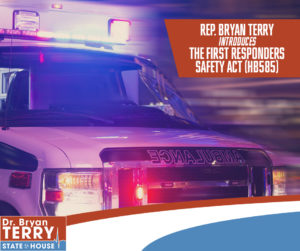 To further explain, Rep. Terry commented that “harassing a first responder does not just affect that individual and their family members. By impacting the recruitment and retention of first responders, those who harass and intimidate them are impacting the ability for my family, and yours, to be protected.”  He went on to say that “their actions negatively affect everyone in the community who relies on help when they need it.  It not only impacts the liberty of that individual responder, but the liberty of the community as well.  Because of the greater impact, harassment of a first responder deserves an enhanced penalty.”  A prime co-sponsor of the Racial Profiling Prevention Act of 2015, Rep. Terry believes that substantive policing reforms need not be mutually exclusive in defending first responders. 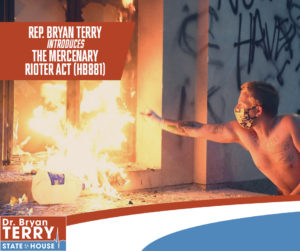 The Mercenary Rioter Act aims to ensure that protests remain peaceful by increasing penalties for those who are paid to participate in riots and those who come from out-of-state to riot.  Recent examples have demonstrated the alarming need for such legislation.  In a violent protest in Kenosha, Wisconsin last year, public records show that at one point, 102 of the 175 rioters that were arrested were individuals who were not from Wisconsin.  Early this year, protests at the United States Capitol complex turned violent, with out-of-state participants like “zip-tie guy” allegedly traveling to the District of Columbia with mal intentions.  This legislation punishes those rioting as “mercenaries” by handing them a Class E felony, and it increases the mandatory minimum for aggravated rioting to a 60-day sentence.

“As Americans, we have the right to peaceably assemble, and Tennesseans don’t want outside influences coming into our communities and creating violence.  Addressing grievances with our state government is constitutionally protected, but, when one is paid or comes in from out of state, their motives don’t align with these protections,” explained Terry.  “While only about 7% of protests turn violent, those that do can have dramatic impacts on local communities.  Psychologists speak of Social Contagion Theory in which individuals in groups or crowds may behave or act differently than if they were alone.  Cutting down on paid or out of state instigators can help decrease the chances that peaceful protests turn into riots and decrease the risk of otherwise law-abiding citizens committing a criminal offense.”

Rep. Bryan Terry represents District 48 in Rutherford and serves as the chairman of the Health Committee.  He is in his fourth term and can be reached at rep.Bryan.Terry@capitol.Tn.gov or 615-741-2180.