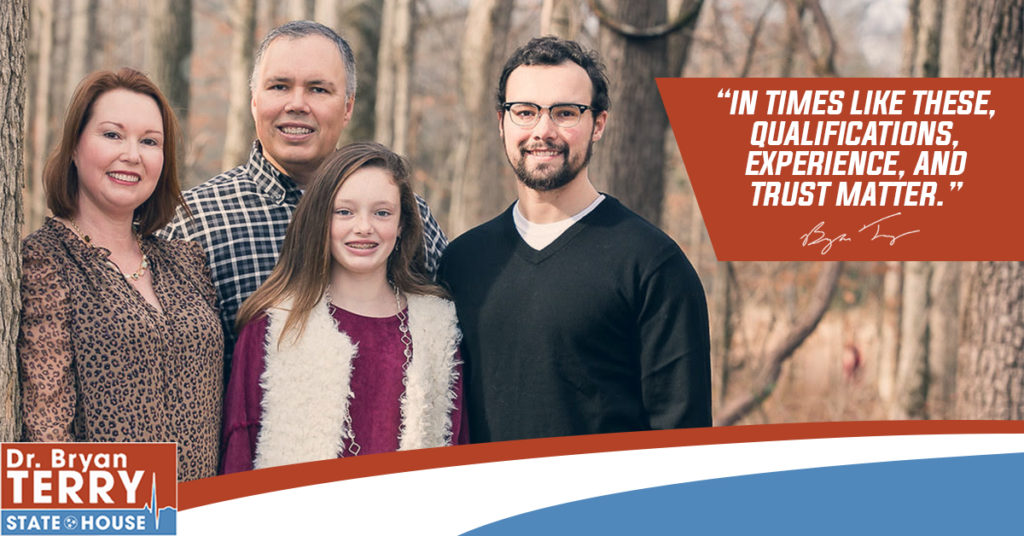 “In times like these, qualifications, experience, and trust matter.” – Rep. Bryan Terry, MD

Representative Bryan Terry, MD is a husband and father who represents District 48 guided by  Christian, Constitutional and community oriented principles.  He employees a business-like process to help find solutions to issues and concerns for the district, community, and state.  With a passion for improving the lives, liberty, and livelihoods of Tennesseans, his self governance training makes him an effective advocate and voice for District 48.

While others run on resumes long on empty rhetoric and short on solutions, Rep. Bryan Terry offers an unmatched set of qualifications to meet the diverse needs of District 48.  Beginning with his blue collar, auto salvage roots and family farm background, and extending through his career as a physician and as an Affiliated Associate Professor for UT Graduate Medical Education, Rep. Terry’s experience in a diverse array of fields provides him with a unique perspective on the livelihoods of Tennesseans.  This frame of reference enables him to be a better voice and advocate for Tennessee families.

In addition to his professional background, Rep. Bryan Terry holds the exclusive distinction of being the only Native American tribal member in the Tennessee General Assembly.  He has, also, had to respond to a natural disaster and domestic terrorism when his family farm was hit by an EF-5 tornado and when he worked as an intern for victims of the Oklahoma City bombing.  These life experiences have helped shape his commitment to others while preparing him to be uniquely suited to address the challenges of today.  His commitment is exemplified  by his prime co-sponsorship of legislation like the Racial Profiling Prevention Act and the Right to Farm Act, and his leadership to address drug trafficking.

Rep. Terry has served as the chairman of the Health Committee, as well as the Health Subcommittee chairman, where he has been a strong patient advocate and has worked to find solutions for the opioid crisis, patient access, lowering of prescription drug prices, and patient protections.  He has served on the Insurance, TennCare, Consumer and a Human Resources, Public Health, Mental Health and Substance Abuse, and Civil Justice committees where he has worked on policy to improve the lives and livelihoods of Tennesseans while protecting our liberties.

Being respected by community leaders statewide, Rep. Terry was named to the Temporary Assistance For Needy Families (TANF) working group where he was elected by both Senate and House members to be the chairman to oversee 732 million dollars.  Under his leadership, he helped discover 221 million in improperly used Tennessee taxpayers dollars and helped develop a program entitled “Pathway to Prosperity” which will help needy families develop marketable workforce skills to improve their livelihoods.

Having earned recognition from various groups as a Legislator of the Year, Taxpayer Hero, Family Champion and a Model Public Servant, Rep. Terry has consistently provided District 48 with factual and up-to-date information on taxes, education, health care, the land-fill and more.  He is a voice of reason and trust with endorsements of organizations such as the Tennessee Professional Firefighters Association and the National Federation of Independent Business.

In times like these, qualifications, experience, and trust matter and Representative Bryan Terry, MD is the only candidate with a proven resume to effectively advocate for the shared values of District 48.