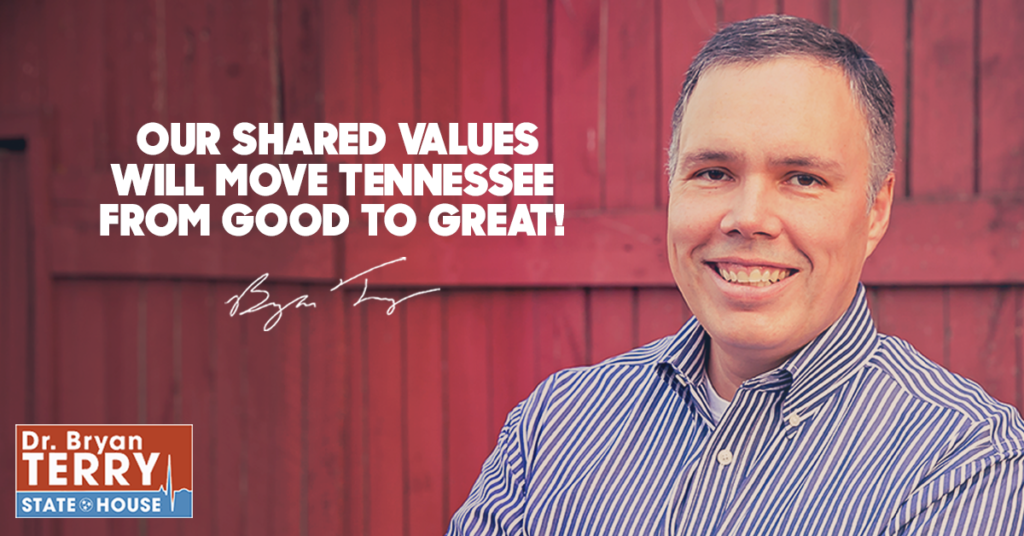 MURFREESBORO– In recent years, Tennessee has undergone a remarkable transformation. Gone are the days of high taxes, even higher unemployment rates, dismal education rankings, threats to our security, and a stagnant economy. All of these were the result of failed Democratic leadership in Nashville prior to 2010. A new era was ushered into our Tennessee General Assembly when Republicans became the state’s majority party in 2011. Now, Tennessee is a national leader on several fronts, and conservative lawmakers who share your Tennessee values are critical to ensuring our future success.

It has been a privilege serving as your voice for our SHARED VALUES in Nashville over the last four years. During this time, I have supported measures that have improved Safety, decreased Healthcare costs, fortified our Agriculture community, enhanced Recreation and tourism, boosted Tennessee’s Education system, addressed the Diverse needs of our community, given a Voice to our citizens, lowered taxes and made government more efficient to boost Affordability, protected the Liberties afforded to us by our Constitution, strengthened protections for our Unborn children, promoted a vibrant Economy, and reinforced our Security.

Shared values are at the heart of every single aspect of my service to the citizens of our community and Tennessee. Our families and their children deserve to live in safe neighborhoods, and that’s why I have strongly advocated for additional resources that back our local law enforcement, first responders, and military personnel.

My conservative colleagues and I, also, agree we must improve access and the quality of healthcare available to our citizens while lowering costs. Obamacare mandates and regulations have already jeopardized patients by driving up costs and decreasing access to providers and facilities.  House Republicans want to create a consumer-driven system that puts patients and their doctors in control of their health decisions without interference from the government or insurance providers. This can be accomplished through patient-centered reforms and innovative policies, as well as increasing competition, which will ultimately lower costs and improve access and the quality of care patients receive.  With the new guidance from the Trump Administration in the form of “State Relief and Empowerment Waivers”, Tennessee will will have the opportunity to properly address a healthcare system broken by the Obama Administration.

I believe in creating jobs, not inciting mobs. We need to continue creating environments where industries like agriculture, recreation and tourism, and other important sectors thrive. Current statewide unemployment has remained near record-low levels for more than an entire year, and locally, we have the third lowest rate in the state — just 2.9 percent. The average Tennessee household income has, also, grown at the fastest rate in the southeast region.

Because of the strategic investments made by Republicans in education — including more than $200 million in new K-12 funding and $55 million in teacher pay raises just this year alone — our students are the fastest improving across math, reading, and science in the entire nation. These types of efforts help us better address the diverse needs of our citizens by preparing our current and future workers with the education and training needed to attract and fill the quality jobs in Tennessee.  After all, Republican leaders want our current and future employees, entrepreneurs, and business owners to control their own destinies and excel at all levels of their careers.

In the years ahead, I will continue to give a voice to our citizens so they remain actively involved and engaged as we work on new solutions to meet their needs. While we have cut almost $1 billion dollars in taxes in recent years, we must continue to keep taxes low and government efficient. I will always fight to protect your individual liberties granted to us by our Constitution, safeguard our unborn children, back initiatives and the allocation of resources that allow for our continued economic growth and prosperity, and better secure Tennessee’s borders to keep dangerous drugs and violent criminals off of our streets.

These are very exciting times in our community, our region, and our state. We are on the verge of greatness, and I know that together, Tennessee will do more than just scratch the surface of its endless potential. Your continued partnership and support of House Republicans at the polls will ensure that Tennessee remains a model for our entire nation to follow!

Bryan Terry, MD serves as Chairman of the House Health Subcommittee, as well as a member of the House Health and Civil Justice Committees. He lives in Murfreesboro and represents House District 48, which includes the eastern half of Rutherford County. Terry can be reached by calling (615) 741-2180 or emailing: Rep.Bryan.Terry@capitol.tn.gov.